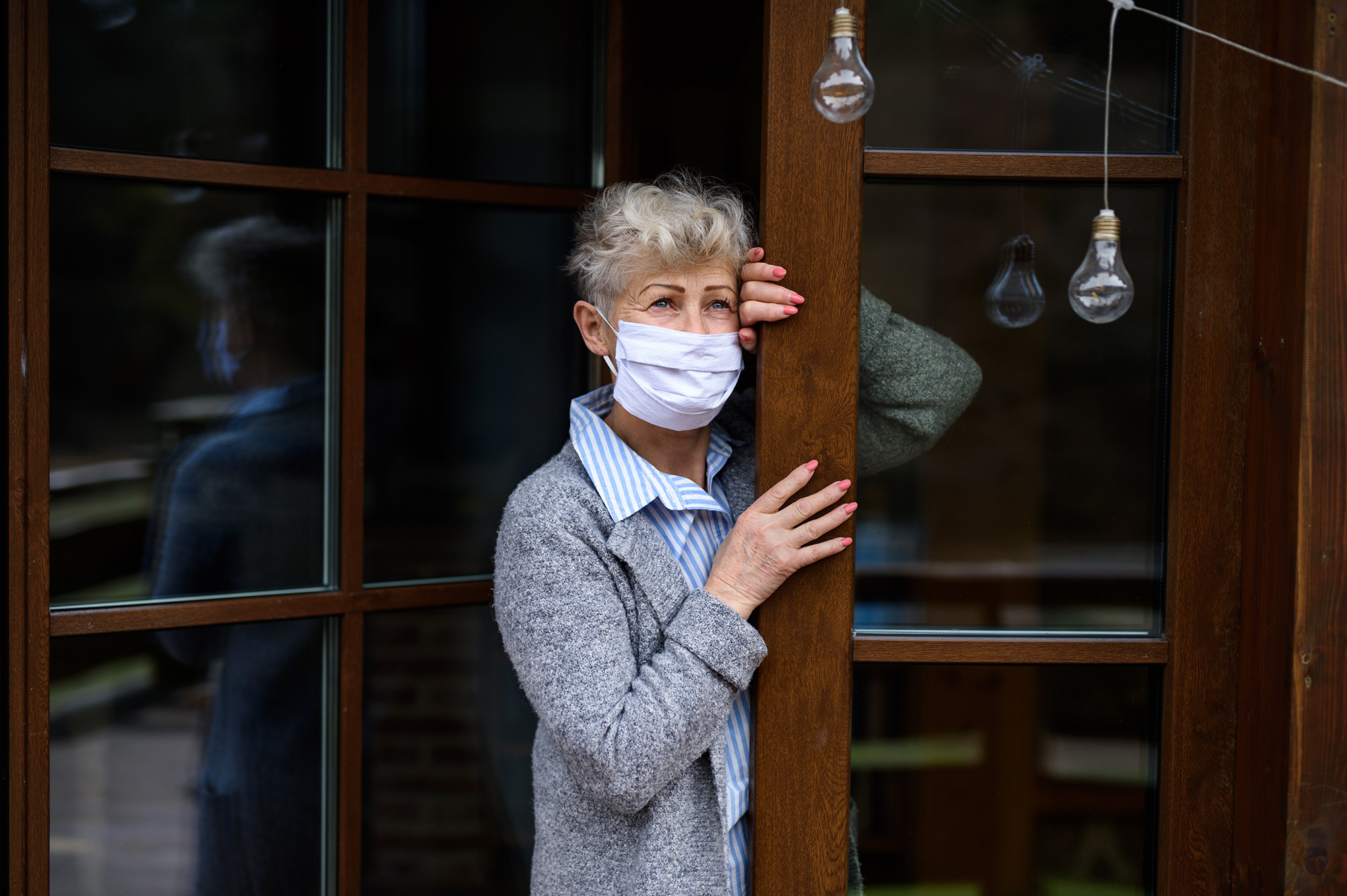 “Who could have dreamed that every individual in the whole world could be suddenly under threat of death from a previously unknown virus for which there is no known cure? It’s a nightmare – it has all happened so quickly. No sooner had we heard of its existence than it was breaking out everywhere on the planet! The only way to be safe – or not pass it on to others, is isolation.”

Lisa’s mother, Martha, was in a nursing home and astonished to receive her telephone call. She and most other residents hadn’t understood why their usual visitors had stopped coming. When Lisa explained and said she was also staying away from the rest of their family, not yet being sure that she could stay virus-free, Martha told her not to worry, “worse things happened at sea”!

The risk of passing it on to her loved ones frightened her even more than catching it! She was still mourning the death of her husband but now, knowing how this lockdown would have been a nightmare for him, she reflected with a sad sigh, that her situation could have been a lot worse!

She had been distracted by her train of thought and was jolted back when Martha told her that her closest friend in the Home was not at all well. She’d promised to keep her company in front of the TV, “…and the quiz show must have started by now, so I have to dash – sorry!”

The phone went dead… Slamming it back onto the cradle she couldn’t help feeling angry and frustrated…  We’ll all end up dead at this rate!

Four weeks into the pandemic, Lisa settled into a regime. A kind neighbour, Elsie, shopped for her and left the goods in her porch, together with the bill so that the money could be transferred between bank accounts. Several heavier items were available on-line, so she rarely left the house.

Her divorced brother-in-law still rang her up so often that she suspected he might have ulterior motives! All in all, she enjoyed her quiet life now. Her daughter was happily married, living abroad and wrote lovely long letters. Now, these were supported by video calls on their I-pads!

The long days in isolation had enabled her to catch up on all the reading she’d accumulated: apart from library books there was a stack of half-read magazines. Some were still in their plastic covers, and she had meant to cancel them… Now, she had time to try some of the recipes that had appealed to her, and suddenly felt the urge to bake. It was several hours later, eyeing the fruits of her labour, that she wondered what she could do with so many cakes and pies!  Watching them cooling in their trays, she suddenly had the answer – she could give most of them to her neighbours.

As they had cooled and were still untouched, she wore one of the thin rubber gloves – an unused gift received ages ago (having professed a desire to redecorate) and packed the fruits of her labour into plastic bags – thank goodness she had a plentiful supply! Her next move was to ring Elsie, who agreed to collect them from the porch immediately, and was delighted when Lisa said that she could give them to people who were most in need.

There were so many rules to obey now, to prevent the contagion spreading; no touching, keeping yards away from people, wearing facemasks in case you have it yourself (as yet undiscovered) so that you don’t infect anyone else…! It was a nightmare. Washing hands regularly was no hardship … it was a lifelong habit always to assume that they were unclean before starting anything new!

A noise in the street penetrated her reverie and drew her to the window… Unbelievable! For as far as she could see, balconies were full of people shouting and clapping! She’d heard on TV that it was being done to thank all the care-workers and hospitals for their sterling devotion to duty. Although equally grateful, she held back from joining in – it wasn’t in her nature to display her emotions publicly.

The news on TV covered little else other than the spread of the virus. After several attempts to find entertainment by switching stations she gave up. There was very little on – and much as she admired the people who did amazing things to raise money, she ended up feeling useless.

To ease her conscience, she opened her bank account and contributed to a few worthy causes.

The days were beginning to blur into one long drawn out marathon of eating, sleeping, gazing through windows, watching flickering repeats on television, thinking and feeling helpless.

…But it wasn’t her mother, it was the manager of the Care Home where Martha lived.

Accepting the call, she listened in stunned silence as the manager told her that her mother had been admitted to hospital, but she would not be able to visit her, or see her, probably, ever again.

He sat at his desk inside her monitor screen and cried as he told her what was happening and why. That the friend, with whom Martha watched quiz shows, was a new resident, sent by the local hospital for care – as a possible but untested Covid victim. Untested, because the tests were in short supply.

Silent, for a moment, he looked down at the paperwork in front of him and then, gathering courage, looked back at Lisa and continued.

He’d been informed by the hospital manager that “resources must be focussed on those who stood a chance of recovery. Old people are unlikely to recover, so treating them is a waste of time…” Following the conversation, the Care Home had received several new residents, sent from the hospital…

Lisa tried to absorb the words and failed, letting them wash over her as she stared at the man, sobbing, in front of her… what was his name? …Brian?…

He told her how the care home had done its best to keep its residents and staff safe, that the new residents, sent from hospital, were meant to stay in isolation… but they were old… they didn’t understand why they couldn’t greet and embrace new friends, they didn’t understand why they were at risk. They were unable to comprehend why the people they trusted had abandoned them to care homes, when they needed isolation and treatment.

Tears rolled down his face, splashing on the wooden surface of the desk, as he told her how his wife had cared for Martha, when her symptoms first developed, without the protective gear that the Home had been promised …and how they had all improvised with old aprons and masks sewn late at night, following hastily written instructions from videos they’d found on the internet.

With his voice strained, he told her that Martha would not be alone, at the end, when it came to it, as his wife was with her, isolated and also critical. Choking, he listed the other residents to whom Martha had unwittingly passed the virus and, finally, he went silent. His swollen, sorrowful eyes watched her assimilate the horror and grief his news had brought, until she reached the same point of bewilderment and disbelief that he had been forced to face.

“We tried…” he said, “we tried. We did what we were asked to do and we cared – we could do no more – I am so sorry…  …and I’m sorry that I couldn’t come to you , to tell you these terrible things, properly, somewhere where you could have a friend to console you and a shoulder to cry on… I had to tell my children, today, that they have to stay with their aunt, that they might never see their mother again – and that I will have to stay in the home with those of our residents who are still here …until the end. That is the job I took on and it is the responsibility I must shoulder. I am just so sorry that we weren’t…” He broke down, his body wracked with sobs and coughing, so she was unsure whether or not he finished his sentence.

What was she meant to say?

His wife had risked her life to help Martha and lost. He was clearly not far behind, but still trying to do his job, to help, to care. She loved her mother dearly, but could not believe, given the choice, that Martha would have wanted these unasked sacrifices made for her, even assuming she had any idea what was happening.

She might never see her mother again. Her mother would not understand – would be ill, fighting for her life and the only people around her were strangers.

Before she could speak to show him that she understood – that she was grateful for his family’s care of her mother – for how much they’d tried to help – how sorry she was that they were paying a terrible price for caring for others, for taking risks that she would never have had the courage to do …he ended the call.

That evening, when she saw her neighbours gathering in the street, in readiness for their accolade of thanks to the people who cared, nursed, doctored, delivered, protected and helped, she opened her window as wide as it would go, and banging a wooden spoon onto an old saucepan, she joined the cacophony of emotion – of fear and hope, of gratitude and community …and finally understood it.

The book is also available from www.uppbooks.com